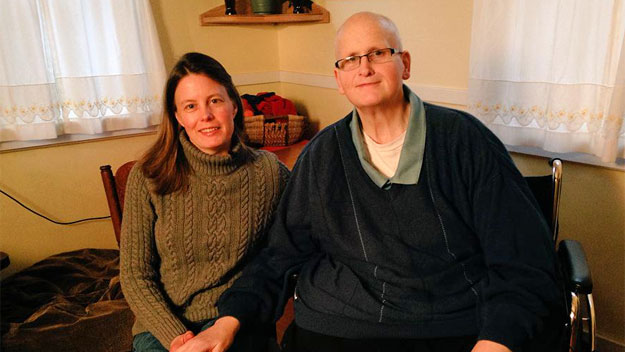 Once dubbed “The World’s Heaviest Man,” a British man has traveled to New York City to undergo surgery to remove 99 pounds of excess skin.

ORANGE (CBS) – A British man who was once one of the heaviest men in the world will undergo life-changing surgery next week.At his heaviest, 54-year-old Paul Mason weighed nearly 1,000 pounds. “It was so bad, that the thought of one day, me walking into the kitchen full of food just horrified me, scared me. It’s like an alcoholic walking into a bar,” says Mason.

Mason lost nearly 650 pounds after gastric bypass surgery in England in 2010. Soon after, he realized his health concerns were far from over. “I’d done all that hard work of getting the weight down and you’re still trapped in a baggy old skin,” says Mason. Mason was left with 100 pounds of excess skin.

“It’s like if you had two children attached to your body – one around your leg, the other around your middle,” says Mason.

Mason is in constant pain and relies on crutches and a wheelchair. He moved to Orange in October 2014 to live with his fiancée, Rebecca Mountain, and closer to the New York City plastic surgeon who offered to perform skin removal surgery free of charge. On Tuesday, Dr. Jennifer Capla from Lenox Hill Hospital will perform the life-changing, eight hour long surgery.

Mountain, 41, will be at his bedside. The couple met in 2013 after Mountain saw Mason’s story online and reached out.

“I just thought someone like that needs a friend or someone to really rally for them,” says Mountain.

Mountain proposed on an episode of “The View” in 2014. The couple hopes to one day live a relatively normal life together.

“We’re just trying to move on. We haven’t gone on walks together…I think a lot of people take that for granted… There’s a lot of things that we still have left to experience,” says Mountain.

Mason will spend three weeks recovering from his surgery in a nearby hotel. An anonymous donor has offered to pay the bill. Mason will have to undergo additional skin removal surgeries in the future, and fears mounting medical bills.

This article was published on Boston CBS Local News